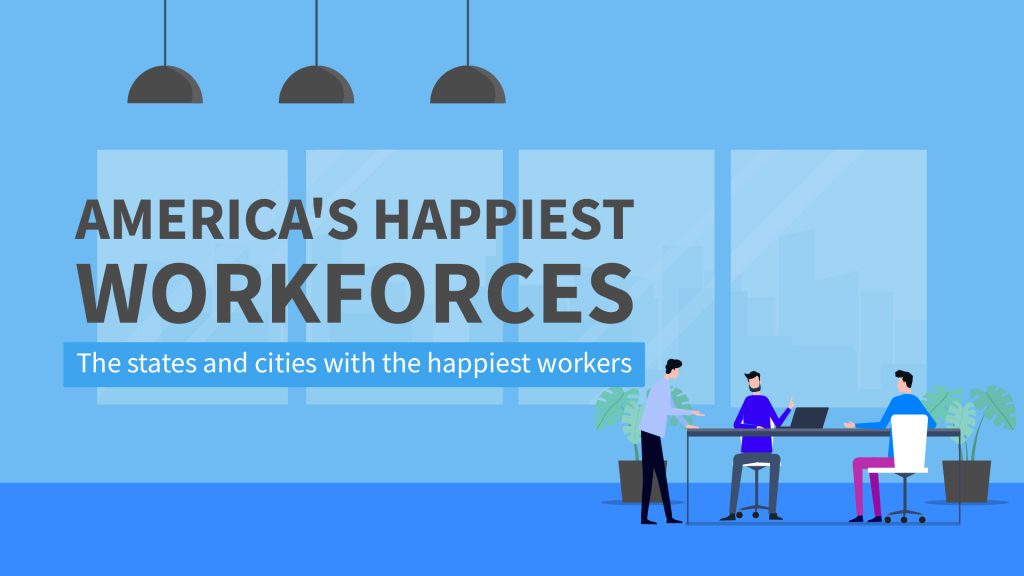 The states and cities with the happiest workers

Being happy at work is hugely important, not just for your own personal wellbeing, but also to ensure that you keep motivated and productive at work.

The effects of the coronavirus pandemic have hit people differently in different workplaces and industries but it’s more important than ever that we’re satisfied and happy in our jobs.

We’ve ranked each state in the US, as well as some of the country’s biggest cities on factors such as hours worked, vacation days taken, and average earnings, to find out which have the happiest workforces.

America’s happiest states to work in

The state taking first place as the happiest to work in was Connecticut, with a score of 86.39 out of 100.

Just behind Connecticut in second place was Massachusetts, which was the state with the highest average earnings in the country, at $53,550 a year.

Massachusetts is one of the smaller states in the US but has been a very influential one throughout history, with many major corporations based in the Greater Boston area, in industries such as biotechnology, engineering, finance, and more.

In third place was Minnesota, home to the Twin Cities of Minneapolis and Saint Paul. The North Star State scored particularly highly when it came to the overall happiness of its residents, suggesting that Minnesotans have struck a pretty healthy work-life balance.

In fact, Minnesota often ranks toward the top of standard of living comparisons, being praised for factors such as safety, education and employment opportunities, as well as the things we’ve mentioned here such as median salary.

However, not all states are quite as satisfied with their workplaces, with Texas, unfortunately, taking bottom place in our rankings, with a score of 44.09 out of 100.

While the Lone Star State had a decent happiness score of 52.56 out of 100, it scored poorly on each of the other factors, with Texans allowing an incredible 67.1 million earned vacation days go to waste over the course of a year.

While West Virginia was actually one of the best states when it came to making the most of their earned vacation days, the state scored poorly on other metrics, particularly the overall happiness of its residents, where it scored just 33.42 out of 100, the lowest out of all 50 states.

Mississippi was the third-least happy state to work in, narrowly ahead of Arkansas and Oklahoma.

It was the state with the lowest average annual earnings at just $32,710, which is over $20,000 less than in the highest-earning state, Massachusetts.

America’s happiest cities to work in

With Minnesota as a whole coming in third place when it came to the happiest states, it should maybe be no surprise to see Minneapolis take first place when it comes to cities, acting as the main business hub between the major cities of Seattle and Chicago.

The city had the second-highest happiness score and also saw its residents work an average of just 37.6 hours a week, much less than many other cities, with a higher than average number of part-time workers in the state.

Taking second place is Seattle, with many people here working in the city’s large tech industry, with the likes of Microsoft and Amazon both being headquartered in the area.

Seattle scored highly when it came to happiness, vacation days used, and earnings, with the average worker in the city taking home $59,835 a year.

Taking the final spot in the top three cities to work in is Portland, Oregon. Portland is known as a great city to live in, with lots of parks, coffee houses, and microbreweries to enjoy, so it’s no surprise that it scored highly when it comes to happiness, but also in terms of the number of vacation days used, and average hours worked.

The city which came bottom of our rankings was Dallas, in Texas, which had the highest average working hours of all the cities we looked at, with the average person putting in over 40 hours a week, but earning $34,479, which was less than many other cities.

The country’s most populated city is also one of the least happy to work in, with around 37.5 million vacation days going to waste and slightly below average earnings of $39,828.

As one of the world’s major commercial, financial and cultural centers, millions of people come to NYC to work.

Another Texas city was among the worst to work in, this time Houston. Much like Dallas, the city had some of the highest average working hours (40.1 per week), but also some of the lowest average earnings ($32,521 a year).

We ranked each US state, as well as 30 of the biggest cities, on four different factors, giving each place a normalized score out of 100 on each factor, before taking an average across all four.

The number of vacation days left unused according to the U.S. Travel Association’s Under-Vacationed America report.

The mean usual hours worked in the past 12 months for workers 16 to 64 years according to the United States Census Bureau.

The median annual wage per person according to StatsAmerica for states and the United States Census Bureau for cities.

A score based on numerous indicators, sourced from WalletHub’s Happiest States and Happiest Cities reports.

Where do women receive the most equal pay in the US and around the world? Equal pay for equal work

Being made redundant is not a great feeling, and can often be a very difficult time for many people. Searching